I find a kind of insect which I never seen before when I mop the floor, I ignored it a few times. Last week I caught one again, I decide to find out what kind of inset it is this time. 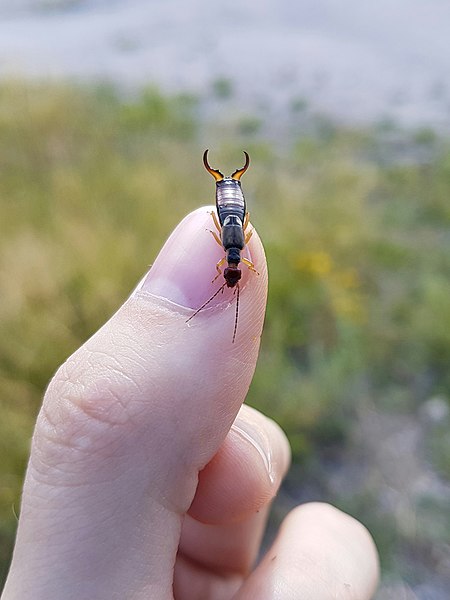 This image is taken by Wikimedia user I naturen.

It’s black, about one and half centimeters long and bears a pair of terrifying pincers on its tail. I took a picture of it then uploaded to iNaturalist, they will tell me what it is. iNaturalist is a non-profit program advocates for people connecting to nature, you can share your observation with community and others may identify it for you. Even if no one helps, you can still try their suggestions by selecting the “Visually Similar” source filter, their algorithm is utterly accurate. I tried with a smart assistant right after I took the photo, clearly it’s not smart enough.

iNaturalist told me it’s an earwig, never heard of. I looked that up on Wikipedia and YouTube. I can hear the boos but YouTube does have some decent videos about this creature, I will link them below. Turn out earwigs are quite cool, let me share with you what I learned about them from the all-knowing internet.

They are called cerci, that means external body parts on an arthropod’s rear segment. Most cerci are sensory organs but earwigs use them to fight and prey. Deep Look said the reason why they not grow on the front is that earwigs are usually hide under the ground, it’s more convenient to drag instead of pushing these pincers. Sounds reasonable, but how do you explain the Antlion Charger and Devourer which kills me countless times in the underground?

Another interesting fact is that you can distinguish the sex of an earwig by looking the shape of pincers. Male earwigs have more curved pincers, gauss that because they fight more.

Most earwigs have this amazing compact foldable wings, the folding ratio(closed area divided by open area) is 1:10 to 1:18. The weird thing is that they rarely fly. Why they evolve complex wings but don’t use it? Maybe just to inspire human to explore new engineering designs. Origami-like design can reduce enormous space and energy usage in engineering, for example, most satellite solar panels are folded to save space. You can find more fascinating origami applications in this Veritasium video.

Female earwig protects her children until their second molt. The mother will defend the eggs from predators, remove fungi off the eggs, help her kids hatch and feed them by trophallaxis(mouth-to-mouth feeding). This is uncommon for non-social insects like earwig. Well, being parents ain’t easy, that’s a universal truth.

I don’t know why I write less words each paragraph, this happens on all my posts. But less is better than nothing. I hope you enjoy this post and wish you a happy new year!